If you own or drive a car, you’ve probably had reasons to have a bottle of water in your car; either to drink or to protect your car from overheating and this is perfectly fine.

We know for a fact that it is important to have water in your car at all times. The question, however, stems from whether you should leave a water bottle in your car. Is it safe or is it dangerous?

To answer this question, let us take a quick look at what happens when you leave a bottle of water in your car.

What Happens When You Leave a Water Bottle in Your Cars?

One thing that could happen when you leave a water bottle in your car is that it could start a fire in your car. While the water in itself might not be able to start a fire, the plastic that the bottled water is made of that can result in a fire.

Let us explain this – When you leave a bottle of water in your car, the sun shines through the window and then through the bottle. Once this happens, the bottle becomes a sort of magnifying glass. By focusing the rays of the sunlight on a specific part of the car for a prolonged period of time, that spot could get hot enough to ignite.

Nigeria is a hot country based on its weather conditions. It could get uncomfortably hot; up to 32 degrees Celsius (90 degrees Fahrenheit). Humidity is very high and nights are very hot with the exception of the rainy season and Harmattan.

There was a case where a car owner narrated an incident of when he parked his car, sat in it and then suddenly noticed smoke inside the car.

According to the car owner, “It was hot enough to start burning a hole through the seat.” However, for the bottle of water, it left little burns on it but did not damage the bottle. 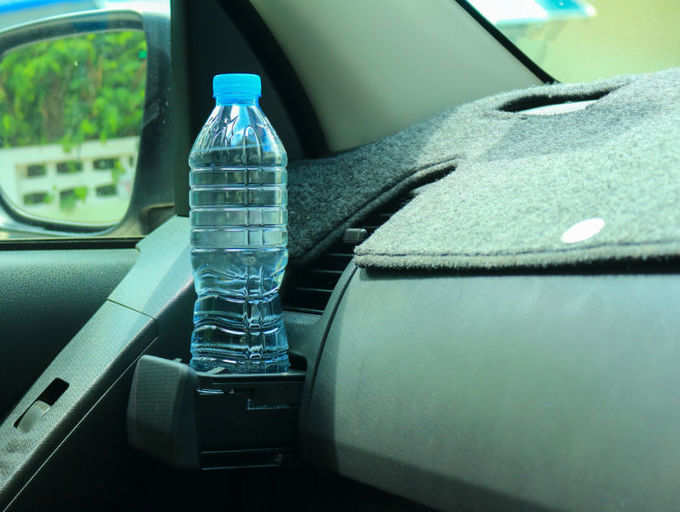 What Do Experts Say About Leaving a Water Bottle in Your Car?

Scientists have affirmed that exposure to extreme heat can increase the volume of a harmful chemical known as bisphenol A (BPA). This chemical is released into the water by plastics. This explains why the chances of a water bottle igniting into flames increases when the bottle is to extreme heat.

Experts also discovered that when bottles were placed at a temperature of around 150 degrees for a period of four weeks, the volume of BPA released also shot up by more than ten times.

What Are You Supposed to Do With the Water Bottle in Your Car?

While it is okay to carry water in your car, you should not leave them in your car when you are stepping out of the vehicle for a prolonged period of time.

Can You Leave Water in the Car and Drink it Afterwards?

The answer is no and we will tell you why. It is not recommended by health experts to drink water that you have left in a car that you have parked for a considerable period of time. This is mainly because of biphenyl A levels in plastic water bottles.

Final Thoughts on Leaving Bottled Water in Your Car

As much as you can, avoid leaving bottled water in your car. If you must, then keep the bottle away from the direct rays of the sun. Also, bottled water kept in a car parked directly under the ways of the sun should not be consumed as they are deemed unsafe for drinking.